There is a coup going on in America. Only it is not the coup they are telling you about.

The word used in the liberal-progressive press about the riot in the Capitol which took place on 3 January is “insurrection”. This word has been carefully selected. It makes the events sound very serious. It also makes the events sound something like a real attempt to seize political power. At the same time it is sufficiently all-encompassing as to avoid specifics. So you can’t really disagree with it. Of course, a few hundred people milling about inside the government building is not a coup or an insurrection in any sense at all. The idea that these few hundred people could have conceivably seized political power is ludicrous. Only the liberal press could write poe-faced articles in which they convince themselves and (maybe) some of their readers that there really was some kind of a coup attempt last week in the US. It is a tragedy that the police shot one person, that one police officer died after a confrontation with rioters – and that other people suffered ‘medical emergencies’ and died. (I would assume heart-attacks?). It was a serious event – but not a coup attempt.

END_OF_DOCUMENT_TOKEN_TO_BE_REPLACED

There is an almost inexplicable silence from world leaders on this question.

It is beyond doubt that China covered up the serious of the situation when the plague first started in Wuhan. Even the FT notes this.

But did it come from the lab or by jumping across species in the Wuhan wet market? Scientists all over the world have lined up to argue for the latter. Nonetheless a few scientists are prepared to openly discuss the possibility of origin in the Wuhan level-4 bio-lab and not dismiss it as a conspiracy theory. [1]

That this is a sensitive topic is evident from this BBC piece. [2] They are at pains to call the lab theory “unsubstantiated” but their own research shows Chinese secret services at pains to stop them investigating. Why? (This article also makes it clear that the current WHO inquiry is rigged to avoid the lab option from the start).

The lab in Wuhan is known to have done gain-of-function experiments in the past. There is a real possibility that Sars-Cov-2 is the result of a gain-of-function experiment which accidentally escaped. The likelihood of the epidemic starting in just the one city in China with a level 4 bio lab where research was being conducted into bat-origin coronaviruses and having nothing at all to do with the lab is improbable. That there is no evidence for the lab theory doesn’t make it a “conspiracy theory”. (There is no evidence per se for life on Jupiter’s moon Europa; but no one says this is a conspiracy theory).

Why this silence from world leaders? Some answers may be provided in this WSJ article. The liberal elites see the idea as being associated with Trump and protectionism and they won’t touch it for that reason. The world is dependent on China and no one wants to offend the economic giant. Still, objectively speaking, the lab theory is a very strong candidate.

China is blocking the already watered down WHO mission. [3] Why could this be? And why does this news – that the country of origin of this deadly pandemic is not cooperating with the WHO in attempting to understand the causes get no public comment from the political leadership of the UK or EU? That really is strange.

This article in the Telegraph characterises the consensus narrative which the Western liberal press is trying to establish. The idea that Sars-Cov-2 may have originated in the level 4 lab in Wuhan is a “conspiracy theory” which has “been roundly dismissed by the global scientific community”. But it hasn’t. True; the consensus is it is not an artificially modified virus. But there are dissenting voices from within the scientific world. “Sky News has spoken to four other scientists who believe that the lab theory should not be ruled out, though they did not say it was more likely than a natural explanation” [1] Some of these dissenting voices suggest that it was indeed the result of a gain-of-function experiment and it accidentally escaped. I particularly like this quote from Professor Richard Ebright of the Waksman Institute of Microbiology at Rutgers University in New Jersey, (who is not one of the four scientists mentioned above):

Persons who use term ‘conspiracy theory’ to describe possibility of accidental release reveal themselves to be unable to read, unable to reason, or uninterested in truth

Which is indeed true – and which, as this post points out, is how the vast majority of the Western media is behaving, which is why it is so strange. It is like there is some kind of collective fear. There is a monster in the room but everyone agrees not to mention it. 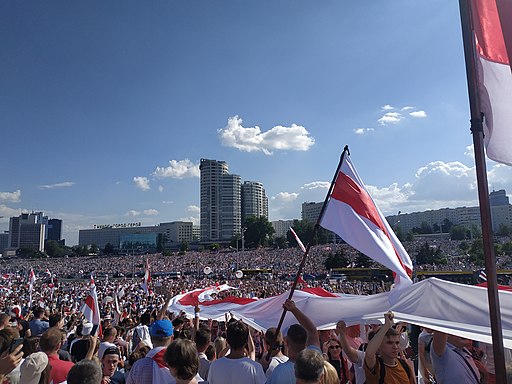 The Guardian reports that the representative of the EU Council of Ministers has said:

The people of Belarus have the right to determine their own future. To allow for this, violence has to stop and a peaceful and inclusive dialogue has to be launched. The leadership of Belarus must reflect the will of the people. There should be no outside interference.

Meanwhile European Heads of State and Foreign Ministers are actively making statements in support of the opposition candidate (who is being harboured and given a platform in a neighbouring state – Lithuania), decrying the elections as “fraudulent” (“without any evidence”) and generally supporting the opposition.

They really are unaware it seems that all this constitutes “interference” of the first order. It turns out of course that “interference” means Russian interference whereas their interference is something else again. END_OF_DOCUMENT_TOKEN_TO_BE_REPLACED

Proceedings in London are unfolding in the predictable way. The US side is claiming that:

He [Assange] is not charged with disclosure of embarrassing or awkward information that the government would rather not have have disclosed… The disclosures charges are solely where there was a risk of risk. [sic.]

The risk claim relates to the claim that Assange released information which “would” place informants in Iraq and Afghanistan at risk. The claim is that Assange released the names of “individuals who were passing on information on regimes such as Iran and organisations such as al-Qaida”. Of course; relying on Iran here in the same breath as Al-Qaida is a reflection of a uniquely US view of the world. The European view (without Johnson) is that Iran is a reasonable country with whom we can do business. The use of Iran in this manner is a kind of a trope. Is a ‘non-political’ and juridically independent British court going to let it pass? END_OF_DOCUMENT_TOKEN_TO_BE_REPLACED